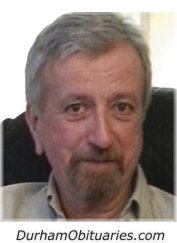 GOGGAN, James 'Jim' - It is with great sadness that we announce the sudden passing of James 'Jim' Goggan on September 8th, 2020.

Predeceased by his parents, James and Theresa Goggan.

Jim was born in Saint John, New Brunswick in 1952.

Starting young, he worked as a mechanic on motorcycles, cars, and finally large trucks. He retired to Bancroft, ON where he enjoyed fishing and was an active member of the Bancroft Fish & Game Club.

Jim was a proud and devoted father, grandfather and uncle.

As a father he was incredibly supportive and gave his all.

As Grandfather he was patient, kind and loved them with every ounce of his being.

He especially prided himself on being an amazing uncle to his nieces and nephews and always made time to be very present in their lives. He was really good at observing some small need you had and buying it for you.

He was an entertainer, a story teller supreme. His words, and the manner in which they were said, stuck with you. You’d often find yourself, years later, repeating a story he had told.

Jim always knew what to say when someone needed his guidance and offered great advice. He was a very wise man and a true treasure to his family and friends.