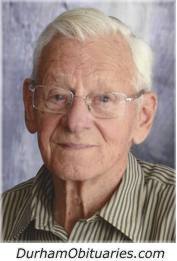 Our beloved father passed away peacefully at the age of 97, with his family by his side.

He was the cherished husband of the late Janty (Janetje) née Van Den Bosch for 39 years and the loving father of his sons Ronald (Minjung Kim) and Edward, and his daughter Jeannette Rensink (David Kalef).

He is survived by his sister Dina Blom (Jan) of the Netherlands and many relatives and friends.

He is predeceased by his brothers Nicolaas and Hendrik Jan.

Born in the Netherlands, he became a dairy farmer when he first settled in Canada.

He was also an employee of General Motors, Oshawa for 30 years.

He loved working in his garden and sharing the flowers and vegetables he grew, often delivering them on his bicycle.  He enjoyed attending church and will be missed by his many friends there.  Interment at Thornton Cemetery on November 5, 2020 was held privately.

A Celebration of his Life will be held on a date to be announced.

Donations in his memory may be made to Emmanuel Reformed Church in Whitby or to the Salvation Army.

Online condolences may be expressed at wctownfuneralchapel.com .