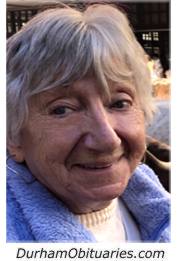 Anna Maria Ruscica Trevor-Wilson, age 84, passed away peacefully on November 11, 2020 with her son, Kevin, by her side.

Anna was born to Giuseppe and Corradina Ruscica on September 10, 1936 in Toronto, Ontario.

She was preceded in death by her loving husband, Douglas and her devoted daughter, Alison, her parents Giuseppe and Corradina Ruscica, her brother Thomas Ruscica, her sisters Emmanuela Ruscica Tumino (George) and Constance Ruscica Volpe (Frank).

Anna grew up in Toronto surrounded by several sisters and brothers. She often spoke of the times when the family would spend their summers at the cottage and how great life was during those days.

Anna graduated from the Loretto Abbey. She worked at the Toronto Stock Exchange where she met the love of her life, Doug, and they married on February 20, 1960 residing in Toronto for 25 years.  Anna and Doug raised two wonderful children, Kevin and Alison, and were devoted parents in all their endeavors.

In retirement, Anna, Doug and Alison moved from Toronto to Port Perry where they embraced living in a small town. Anna worked part time at a bookstore and coffee shop where she always enjoyed conversing with the locals and visitors. Anna and Alison moved to Whitby soon after Doug’s untimely passing.

Anna’s passions included volunteering for many causes and charities including the Canadian Cancer Society and the Progressive Conservative Party where she met many wonderful people.

Anna loved being active and enjoyed outdoor activities. She had a real knack for creating beautiful landscapes for her homes.  Anna was an avid skier and made many friends at Lakeridge Ski Resort. Off the slopes, Anna was known to many locals for her active lifestyle as she would be seen walking and biking around town and at the lake.

After Alison’s passing in 2009, Anna spent the winter months in Texas with her son Kevin, daughter in law Laura and her two grandsons, Corey and Cole. She watched her grandsons play in numerous soccer matches and excel academically.  Anna cherished her role as Nana to Corey and Cole and their relationship was like none other.

Anna’s excuse to leave Texas every winter was to get home for spring skiing. In fact, Anna skied numerous days in early March 2020 just before the Spring thaw.

Over the years, she was instantly embraced and developed long lasting relationships with her Texas and North Carolina family, friends in San Antonio, and especially her “Oak Cabin Family."

She is also survived by many nieces and nephews.  In addition, Anna will be greatly missed by her extended family and friends who encouraged and shared her long full life.

Due to COVID-19 restrictions, a private burial will take place at Hillcrest Cemetery in Woodbridge, Ontario.

Donations in Anna’s memory can be made to the Canadian Cancer Society or the Second Chance Wildlife Sanctuary in Pickering.

Condolences may be expressed online at  wctownfuneralchapel.com .