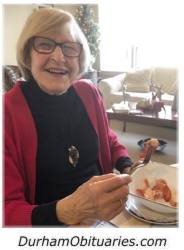 It is with heavy hearts that we announce the sudden passing on November 21, 2020 of a vibrant and classy lady.

Born Mary Agnos Zoe Cahill on December 7, 1923 in Kildare, Prince Edward Island, she had an eye for fashion and attention to detail, so as a young adult she added an “i” to her name to make it stand out and look distinctive.

She was forevermore known by everyone as Zoie.

Married to Art McKenzie for the last 9 years, she was previously married to the late Waldo “Wally” of Bear River, P.E.I. for 49 years.

She was predeceased by her parents and 8 brothers and sisters, with Sister Marie Cahill, of Charlottetown, the only sibling remaining.

Known for her hearty laugh and radiant smile, Zoie led a stimulating life with her RCAF husband and family as they lived on Air Force bases in New Brunswick, Ontario, Quebec and Germany. Although she left PEI as a young bride, the “Island” was always near and dear to her heart and she and her family visited often.

She loved all things PEI, especially its distinctive seafood, from lobster caught in the shallow waters of the western end of Northumberland Strait, to the cultured mussels farmed at St. Peter’s Bay “down east.”

On November 23, some family members gathered in the chapel at BARNES MEMORIAL FUNERAL HOME in Whitby, Ontario, to pay respects, followed by cremation.

To accommodate family members in other parts of Canada, a Roman Catholic funeral Mass will be held in summer 2021 followed by the burial of Zoie’s ashes alongside Waldo at Holy Cross Cemetery, Thornhill, Ontario.

Donations can be made to her favourite charity, Diabetes Canada.