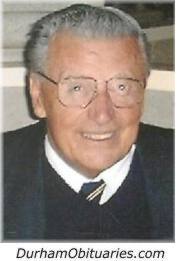 Adored grandfather of Krystian and of his predeceased grandson, Mark Anthony.

Tony immigrated to Canada from Poland after serving during WWII in the Militia as well as in the British army where he mastered his command of English language.

After working at various jobs across Canada, he settled in Oshawa and worked at General Motors for 39 years, first starting on the production line and gradually moving up to the Quality Control Dept as an Engineering Technologist where several of his engineering ideas were incorporated into new vehicle production.

Tony married his soul mate and the love of his life, Vera, in 1955. They were absolutely inseparable and completely devoted to each other. They would have celebrated their 66th anniversary on February 12, 2021.

Tony had a great passion for learning. He completed his high school diploma in Canada as an adult and continued to take college level courses throughout his life.

His dream was to become a writer but instead he devoted his life to his family, putting his dream of becoming a best-selling author on hold. He honed his public speaking skills by joining the Toastmasters Club in 1969 where he remained an active member for 52 years and received numerous accolades and awards.

Tony was very proud of his Polish heritage and was very active in the Oshawa Polish community. Throughout the 1980’s he was a volunteer ESL teacher to new immigrants from Poland.

During his 41 years as a member of the Polish Alliance of Canada Branch 21, he received multiple honours. In 2008, at a ceremony at the Polish Consulate in Toronto, he was bestowed the honour of the “Golden Cross of Merit” from the President of the Republic of Poland for outstanding lifetime contributions to the Polish community in Canada.

Tony was a devout Catholic and found great peace and solace in being a faithful member of St. Hedwig’s Polish parish where he attended weekly Mass without fail.

Tony was a self-taught pianist and had a love for Classical piano, a love which he nurtured in all four of his children. Around the house he was a master of DIY projects.

Tony was quiet and gentle, humble and unassuming, an intellectual and an incredibly hard worker who was always ready to lend a helping hand. He had a wonderful sense of humour, loved to laugh, and always ready with a smile and a kind word for everyone.

Words cannot express how truly loved he was by his wife and children and how very much he is and always will be missed.

Donations in lieu of flowers may be sent to the charity of choice.

Online condolences may be left at  armstrongfh.ca .