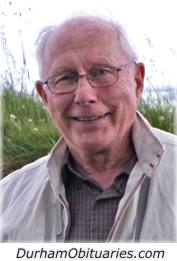 With profound sadness we announce the passing of Robert (Bob) Benson on January 20, 2021.

Bob was born on June 21, 1927 in Port Hope, Ontario, the youngest of John and Ethel Benson’s four children.

That early curiosity and ingenuity was the foundation for both his career and his approach to life.

In 1950 he married Beryl George, a proud Newfoundlander and the love of his life. They settled in Port Hope and soon started a family with the arrival of three boys; Ian, Larry, and Dan.

Some years later they moved to Whitby as Bob took a position as Electrical Superintendent at Dunlop Tire.

They finally lucked out with a girl when Janette was born in 1965.

Bob and Beryl raised a tight-knit family; whether it was taking road trips to Newfoundland, hosting family reunions, or just watching a hockey game, there was always lots of laughter and good-natured fun.

Bob became a master electrician in the 1950s and an Engineering Technologist in 1968. As a life-long learner, he continued to take courses to stay current in his field.

This, along with his vast experience, helped him launch Benson Technical Services in 1980, providing maintenance, design, and troubleshooting expertise to local businesses.

Bob had an abiding interest in technology, nature, history, and current affairs. He was also known for random acts of poetry, often quoting Robert Service or Dr. Seuss. With a great sense of humour Bob was quick to talk with people, especially those being walked by their dogs.

In later years, he travelled abroad: walking the Cliffs of Mohr, climbing to the top of the leaning tower of Pisa, exploring Churchill’s bunker, and explaining to a surprised British museum guide how steam engines actually worked.

Bob is lovingly remembered by his children, Ian (Karen), Larry (Cathy), Dan (Grant), and Janette (Tony), and as adored Poppy to his grandchildren John, Elisa, Andrew, Will, Mike, and Sam, and great-grandchildren Macklin, Hudson, and Ty.

Although heartbroken, we cherish our memories of Dad / Poppy. We remember his kind and compassionate nature, his infamous expressions that would make a sailor blush, and his ability to turn his hand to anything from fixing cars in a freezing garage to rousing games of Newfie Growl.

He was a gentleman and a gentle man.

A celebration of life will be held at a future date. Arrangements entrusted with  W.C. TOWN FUNERAL CHAPEL .

If desired, donations in Bob’s honour can be made to Canadian Wildlife Federation or the charity of your choice.