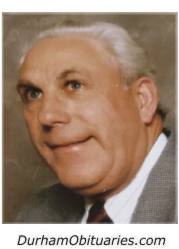 Ed was the proud and loving father of Mark (Laurie) of Toronto, and beloved grandfather to Hayden.

He was predeceased by his loving wife June, and his brothers George Clingen, and John Clingen (Muriel).

He will be sadly missed by his brothers Billy Clingen (Gertie) and Harry (Margaret) and his sister Betty (Joe).

Born on April 12, 1937 and raised as part of a loving family of 6 children in Kilskeery, Ireland, Ed made his way to Toronto in January 1957, supported by his brother Harry and good friend Percy Ross. Within a few weeks of being in Canada, Ed was “saved," becoming an active member of the Gospel Hall.

Ed was a self-described salesman, starting out at Dominion Stores. He quickly moved to Hayhoe Tea, then to JM Schneider where he spent most of his working career.

Ed met June for the first time at Union Station in Toronto, while June was on her way from London to visit her family in North Bay on December 24, 1963. They fell in love and were married on March 12, 1965.

Ed and June moved to Ottawa shortly after that, and Mark was born in 1970. They subsequently lived in Windsor, Bracebridge, and Oshawa, before finally settling down in Whitby.

A devoted husband, father and grandfather, Ed was also an avid historian who loved documenting his ancestry and the history of his birthplace.

He will be missed by his family and friends.

There will be a private family service in the BARNES MEMORIAL FUNERAL HOME Chapel, Whitby on Tuesday, February 2 at 1pm. Interment to follow in Whitevale Cemetery.

If desired and in lieu of flowers donations to Canada Cancer Society - Donations will be gratefully acknowledged as expressions of sympathy.