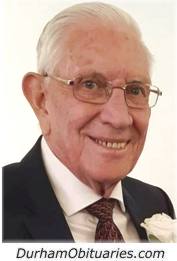 STONE, John Bernard - Born January 13th, 1934, sadly passed away on February 5th, 2021, after a valiant fight with Alzheimer’s, surrounded by the love of his family.

Great Papa to Emma (Michael), Abbey and Jacob, Noah and Austin, Mason and Madilynn, Cohen and Lucus, Jaxson , Swayzee and Baby Parks (due In June), Hunter and Charlotte. Soon to be Great-Great Papa to Baby Bruni (Due in April).

Friend and Work colleague to Many.

Bernie married the love of his life November 22nd, 1954 in Trinidad. He moved his wife and six children from Trinidad to Canada in 1972.  He founded National Hose in 1983 and retired in 2015.  Bernie had a work ethic like no other.

Due to the COVID 19 Restrictions, a private Funeral Mass will be held at 2:00pm on Friday February 12th 2021, at St. Terese Roman Catholic Church in Clarington.

In lieu of flowers donations can be made in Bernie’s memory to the Alzheimer Society of Canada.