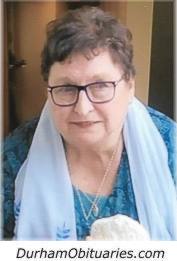 It is with great sadness that we announce that Helen Keys passed away peacefully with her sons by her side at Lakeridge Health Oshawa after a brief but courageous battle with cancer.

She was the loving mother of Paul (Rosanna) and Dwayne and the very proud grandmother of Dylan, Kerrie, and Evan.

Helen was the only child of Edwin “Ray” Lamory and Linda Lamory (née Hess) who moved to Whitby shortly after her birth.

After completing high school, she studied and trained at St. Michael’s Hospital in Toronto to become a Laboratory Technician.

Once completed in 1962, she was hired at Ajax-Pickering General Hospital and remained there until she retired in 2000. In 1964, she married John Keys and they moved into the home that they hade purchased in Whitby and started a family.

She was an active member of St. Mark’s United Church in Whitby and been with the Church Choir since age 12.

Helen greatly enjoyed playing and teaching piano, singing, playing bridge, and spending time with family and friends. She also had a passion for genealogy and had researched and created an extensive family tree going back many centuries.

She will be remembered for her contagious smile, sense of humour, and her generosity when it came to assisting people that needed rides to appointments or just help in general.

Helen will be greatly missed by her cousin Barb Warmington and all our extended family and by the many great friends that she had made throughout her lifetime.

We would like to thank all those friends and family that made food, the PSW’s and nurses that assisted us in caring for her at her home, and the staff at Lakeridge Health Oshawa who did such a fantastic job in keeping her comfortable in her final days.

A Private Viewing will be held at  W.C. TOWN FUNERAL CHAPEL , Whitby and a Celebration of Helen’s Life at a later date.

In lieu of flowers, donations can be made to the R.S. McLaughlin Durham Region Cancer Centre at Lakeridge Health Oshawa and condolences may be expressed online at wctownfuneralchapel.com .