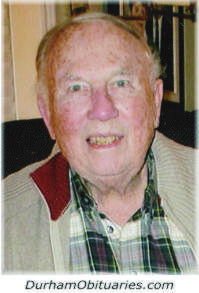 Arn was predeceased by his parents, Wesley and Susan Schell, and his brother Harry Schell.

He is survived by his brother Percy Schell (Dot), sister Marie Cote (Joe), and sister-in-law Barbara Schell.  Uncle Arn will be greatly missed by his many nieces and nephews.

Arn was born and raised in Stouffville, Ontario where he attended school and also worked alongside his father and two brothers at Schell Lumber.

After high school, Arn attended the University of Toronto and part way through joined the armed forces where he became a lieutenant in the Royal Canadian Artillery. When stationed with the Artillery, Arn played Provincial Hockey for Shilo, Manitoba.

After being discharged, Arn returned to the University of Toronto where he played Junior B Hockey, faculty football and was on the water polo team.

In 1947, Arn began his teaching career in Wallaceburg, Ontario where he taught Mathematics and Physical Education, as well as coached many team sports.

Arn’s involvement in sports while living in Wallaceburg was so extensive that he was inducted into the Wallaceburg Sports Hall of Fame.

Joan and Arn enjoyed their first few years of marriage while in Wallaceburg. In 1956, the Schell family settled in Oshawa and Arn began teaching at O’Neill C.V. I.  Once again, his talents were put to good use in the physical education and mathematics departments.

Sports were keen interests of Arn’s and many Friday nights were spent at the Kinsman Stadium coaching football.

In 1963, Arn taught at R.S. McLaughlin C.V.I. and then returned the following year to O’Neill C.V.I as Vice Principal.

He did not remain in the role of Vice Principal for long and in 1967 was promoted to Principal at Dr. F.J. Donevan C.I.  In September 1971, Arn returned to O’Neill C.V.I. as Principal.

He spent ten years there before retiring in 1981.

For Arn, school was just not about academics as he encouraged students and staff to become involved in the many aspects that a school can offer.

He believed in striving for excellence, developing a positive attitude and maintaining a sense of humour.  He encouraged staff and students to work hard, but to also have fun.

Arn has always been a role model and he would practise what he believed. For a few years after Arn retired, he could be seen helping out at King West Landscape Ltd., supporting his son, Wes Schell, as the business grew.

Family weekends at the cottage on Sturgeon Lake were enjoyed by all.  Joan and Arn also travelled extensively and loved their winters in Florida.

Arn enjoyed his work with the Rotary Club of Oshawa and was a loyal member of Northminster United Church.  Dad’s kind heart, wonderful sense of humour and zest for life will be remembered by his many family members, friends and colleagues.

The Schell family is very grateful for the compassionate care that Dad received from all the staff at the Village of Taunton Mills, including the Egerton and Emma Communities.

Due to the Covid Pandemic, a private family service will take place.

Memorial donations to the Terry Fox Foundation or the charity of your choice would be appreciated by Arn’s Family.

We honour a truly remarkable gentleman!