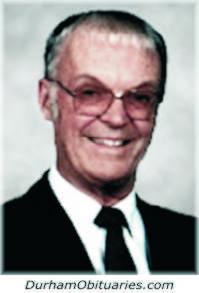 Dear husband of Joyce for 63 years and father of Nancy (Glen Robinson) of Ottawa and Hugh Marshall (Sara nee Coukell) of Oshawa.  Predeceased by his son Clifford and by grandsons Paul and Noel.

Noel will be missed keenly by his Ontario grandchildren Andrew, Melanie and Heather Robinson, and Hannah and Madeline Marshall as well as numerous nieces and nephews.

Noel spent much of his life serving the needs of others.  He had a strong sense of community spirit, which expressed itself in his profession and community work.

He was a scoutmaster for three years and then became involved in St. George’s Church in Pickering where he served as a Sunday school teacher.

During his time with the Church he was a warden, treasurer, property manager and member of the Advisory Board.

The family moved to Whitby in 1975 and Noel became involved with All Saint’s Anglican Church.  He served on the Advisory Board for a number of years, was a Warden for three years and also volunteered on a number of Church committees. Noel was a founding director of the Ajax-Pickering United Way and served on a number of committees as well as serving as President.

Noel worked for the Town of Pickering for 30 years, beginning in 1963 as Deputy Town Clerk and then worked as Town Clerk.  For the last 17 years of his career, he was the Town Manager.

During his tenure, a state-of-the-art recreation complex was constructed as well as the civic complex and library which formed the core of the new town centre.

He was a strong advocate of public participation and dedicated his public life to serving the needs of Pickering residents.  Together, Noel and Joyce co-founded and operated multiple nursery schools for 30 years in the Durham Region.

Noel was Joyce’s “silent partner” and supported her as the financial manager.

His leisure time was devoted to his family and the maintenance of his home and later the cottage where he spent much of his time trying to adapt a somewhat hostile shoreline to a more usable form.

As well, he volunteered as a captain of the Mugwamp, a ferry for Bon Echo Provincial Park. Joyce and Noel visited most of the Canadian provinces as well as taking an Alaskan cruise, and a few winter trips to Florida.

One of their travel highlights was a trip to England and Scotland for their 25th wedding anniversary.

A private memorial service will be held at a later date.

Expressions of condolences may be left at  etouch.ca .