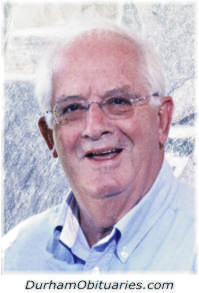 Beloved husband of the late Barbara.

Predeceased by his brothers Doug (late Doris), Jack (late Betty), and Allan (Helen). Bob will also be greatly missed by his extended family.

Robert (Bob) Hugh McKelvie, born June 26, 1930. Born in Shelburne, Ontario, the youngest of four brothers, Bob was a shining light and loved by all who knew him.

The son of the local veterinarian, Bob and the McKelvie family were well known and loved in the community.

The four brothers, Doug, Jack, Allan and Bob, were all very musical and played multiple instruments by ear and loved to play together. Doug and Bob were known to put on a show on the piano well into their ’80s.

Bob was too young to join the war so stayed home with Allan and the family doing all the farm work in their absence. He left his small town in the early 1950s and went to work at the Toronto Dominion bank in Toronto.

He married his beautiful Shelburne bride, Barbara Johnston, in 1953.

He was offered a job in the accounting department at General Motors in Oshawa from someone who knew his family.

They moved to Oshawa and soon after had Bill, Mike and then later Leanne. They bought their house on Inverness Drive in 1964 and still have it today.

Bob retired young from GM in 1987 and had a successful bookkeeping business and worked in a medical office where he liked to be referred to as ‘Dr. Bob’!

Barb passed in 2013 after a short battle with cancer and Bob kept up his active and busy lifestyle until recent years.

He loved to walk at the Oshawa Civic Auditorium seven days a week and, in typical Bob fashion, after joining he quickly had a whole new group of gym friends.

Other than being a loving father, husband, and grandpa, Bob was a highly involved and decorated member of the Masonic Temple of which he had been a member since the 1940s, as were all the McKelvie men.

Bob rose to the highest ranks and was an integral and respected member of the Lodge. Serving the community through the Lodge was a big part of his life in which he took great pride.

He was the light of his grandchildren’s lives and they of his. He took such pride in their accomplishments and successes. He could recount every detail of each of their successes to anyone who asked.  Bob was a true gem. To say he had the gift of gab is an understatement.

Boy could he talk! To everyone. And everyone loved him for it.

There seemed to be very few people who he did not know and who did not know him. He was the kind of person that would strike up a conversation or crack a joke with a stranger and make their day. He had a devilish sense of humour that he snuck out on many occasions.

All those whose orbit he entered were captivated by his warmth, kindness, humour, and generosity.

He always made it a point to thank everyone he met and tell them how grateful he was to have had them help him or to have met them. He was an absolutely delightful human and we were so lucky to have him in our lives.

He will be deeply missed but he will live on in all his loving children, grandchildren, and family members.

A celebration of Bob’s life will be held at a later date.

Special thank you to the staff at the Village of Taunton Mills for the loving care and compassion provided over the past year.

In lieu of flowers, donations to a charity of choice would be appreciated.