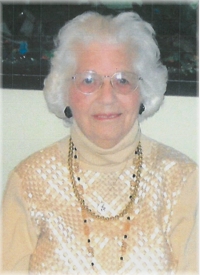 Died at the age of 103 at Hillsdale Terraces-Lighthouse Lane in Oshawa on Monday June 7, 2021.

They were married at Simcoe Street United Church Parsonage on June 29, 1940.

Predeceased by her brother Gordon James Jackson and his wife Agnes and her sister Bernice Perry and her husband Harold.

Great grandmother of Jackson McNeff, Emerson McNeff, Wyatt Garth and Graham Garth all of Texas and Finnegan Butrico and Sean Butrico of Michigan.

Marion devoted her life to home and family and was a lifelong member of King Street United Church and Kingsview United Church in Oshawa.

She enjoyed her work with the Fellowship Unit of the United Church Women and happy times with the Doubles Plus Group.

She enjoyed lawn bowling and bridge.

Marion and Seymour travelled earlier on with the Sydenham Kiwanis Club with friends. Marion and Seymour’s married life was spent at two homes on Gibbons Street at 164 and 640 and she has lived at Hillsdale Terraces since 2008.

Due to COVID restrictions and boarder crossings there will be private family funeral arrangements later through the  ARMSTRONG FUNERAL HOME .

Charitable donations to Kingsview United Church or the Alzheimer Society would be a fitting memorial.

To share an online condolence or story please visit  armstrongfh.ca .