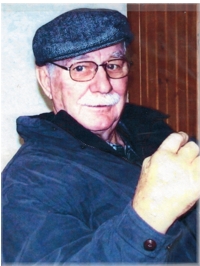 Died peacefully in his sleep at the age of 90 after a long illness.

He dedicated his life and fought hard for the love of his life - Jean.

Bill was born and raised in Smiths Falls, Ontario. He was a “jack of all trades” trying his hand at farming, welding, carpentry, logging, mechanics and truck driving.

Moved to Oshawa in 1970 where he worked for Motor Carriers Ltd from where he retired.

During his retirement years he operated Binders Lock and Key in the Oshawa area.

Bill was an avid hunter and fisherman and sincerely enjoyed the camaraderie of his many friends.

He had a great love for his two ponies Buck and Mac and his companion Muffin.

His family, however, were his ultimate pride and joy. He will be sincerely missed by all.

Private service will be held at BARNES MEMORIAL FUNERAL HOME in Brooklin, Ontario on Friday June 18th at 11 am.

Donations to the Heart and Stroke Foundation in his honour would be greatly appreciated.