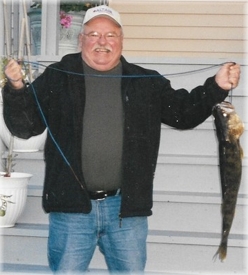 It is with heavy hearts, that we announce Henry's peaceful passing on Thursday June 24, 2021 at Lakeridge Health Oshawa.

He was known to have a quick wit, and his sense of humour was guaranteed to make you laugh.

Special brother to Paul Conlon, and sister-in-law Lise Conlon, of Kapuskasing. Brother to Dawn Cooke and John Conlon of Perth Ontario. He also leaves behind, several nieces and nephews.

We will have great memories of his ability to share his wit, no matter the circumstance.

He was meticulous in his standards, (inspector), but was always willing to listen, teach, learn and support.

His knack of finding a descriptive phrase, such as Blue Minu, often between French and English words, always stuck with whoever heard it. He could be be found rocking to his favourite music, and enjoying a slurpie.

Loved a good war movie, or western, and an avid history buff. Enjoyed fishing, and the company of friends and family.

He was the eldest of seven children, and left home at an early age, travelling to northern Ontario. He found work where he could in Kapuskasing until he signed on with Spruce Falls Power and Paper, eventually getting into the welding trade.

Henry moved to British Columbia in 1970, staying in the province for four years, before heading east to Alberta. He joined the construction boom happening at the time, climbing the ladder of success thru his knowledge and ability in the welding trade.

He never quit a job once he was on it, staying the course till the work was done. Henry worked across Canada and the Pacific Rim over his lifetime, retiring at 64 under his terms.

He will be missed by all who knew him, especially his family and longtime friends Dennis and Ian.

Our worlds are a little quieter. We love you!

In lieu of flowers, donations, to the CNIB or the Salvation Army, would be appreciated.

Arrangements are entrusted to the ARMSTRONG FUNERAL HOME, Oshawa.