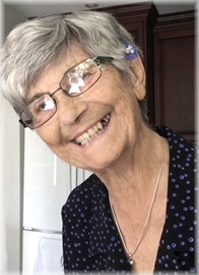 ...A loving wife to Joseph (Joe) Farrugia, caring mother of Richard, Andrew and Geraldine and an adored grandmother to five grandchildren.

Sheila is survived by two sisters, Monica and Irene.

Sheila was born in Sliema, Malta and grew up with a passion for horses and horse riding as well as an overall love of animals. She had a close bond with her father, Herbert (Herbie) Moore, who was the Stable Superintendent of The Royal Saddle Club Stables in Malta and looked after the polo horses for the Royal Navy.

Sheila learned to ride at an early age and soon became a riding instructor and also played and taught polo.

She became an adept Horse Master, working for the Malta Polo and Saddle Club, and later became an Assistant Manager of the Naval Stables.

It was at the stables that she first met Joe, who worked as a groom for Herbie.

Shortly after marrying in 1961, they moved to England and started their family.

In 1993 they immigrated to Toronto where they worked for a short while before they happily retired.

Sheila and Joe spent almost 60 years of married life together which is a testament of their love for each other.

The family would like to thank the staff of both the Emergency Department and Integrated Stroke Unit of Lakeridge Health Oshawa for their help and support.

In lieu of flowers, the family would appreciate that donations be made to the Heart and Stroke Foundation or to WindReach Farm Foundation via CanadaHelps https://www.windreachfarm.org/donate-1.

Expressions of condolence may be left at  etouch.ca .