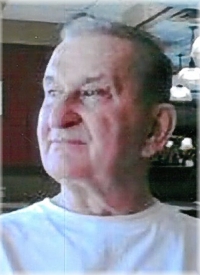 Lovingly remembered by many nieces and nephews.

Austin worked many years at GM, Oshawa and has been a proud member of the Alano Club for over 50 years with 53 years of sobriety.

Austin will be deeply missed by his best friend and sponsor of 20 years John Oulette (Linda).

Each year Austin loved to go home to the east coast to visit his family and fish for bass with his sister.  He enjoyed going on long drives, taking part in Pipe Ceremonies and weekly games of crib with Johnny O. Cherished times were spent playing cards and gliding his wife Shirley across the dance floor at the Alano Club.

In his later years his favourite thing to do was experience life through his great grandson Anthony’s eyes.  Curling up on the couch laughing and watching movies or cartoons.

Our family thanks Lakeridge Health Oshawa and the Palliative Team Nurses & Doctors on 4F for your exceptional care of Austin.

Instead of flowers, donations to the Alano Club, Oshawa would be greatly appreciated.

Visitation will be held on Wednesday July 21st from 2-4pm & 6-8pm, followed by a Funeral Service in the Chapel of Armstrong Funeral Home on Thursday July 22nd at 1pm.

*REGISTRATION IS REQUIRED TO ATTEND THE VISITATION and/or FUNERAL SERVICE. PLEASE RSVP at ARMSTRONG FUNERAL HOME or call 905-433-4711.