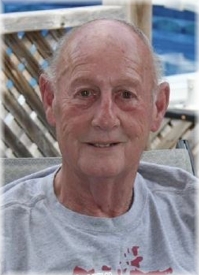 It is with deepest sorrow the family announces the passing of our dear Fred.

He will be remembered by his loving wife Nora (Fleming) of 62 years, son John (Kim), daughters Margaret Brown (Bob) and Christine Waddell.

Missed by sister and brother in-law Joan and Glenn Fleming Born in Oshawa to the late Margaret (Little) and Earl Waddell, stepson to Marian.

Fred was predeceased by his In-laws Les and Audrey Moore and Orma Hardie.

He will be fondly remembered by all his nieces and nephews; everyone loved their Uncle Fred.

Beyond loving his family, Fred will be missed and remembered by so many friends as someone that was always ready with a helping hand, to chat over a coffee or beer, whatever your preference.

He was an easy-going and social kind of guy who always had time for a chat, a story, or a good joke.

An employee of General Motors for 41 years, he lived in Whitby all his life raising three great kids of who he was truly proud of.

He enjoyed watching Lacrosse and coaching Hockey and was a diehard fan of the Chicago Blackhawks.

He will be missed by his dog and constant companion Rosie.

Memorial donations to The Leukemia & Lymphoma Society of Canada, Lung Health Foundation, Humane Society of Durham or CHARITY of Choice.