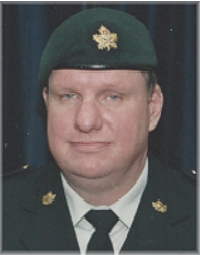 BROOKS CD, Retired Captain Christopher Charles   -   Peacefully, at Lakeridge Health Oshawa, with his family by his side, in his 66th year, on Monday, September 13, 2021.

Chris and Joan were married in 1977 in Centennial Albert United Church, Oshawa Ontario.

Chris and Joan welcomed there first son, Neill in 1987, and their second son Steven in 1989.

In 1994 Chris began working for the Government of Canada as an executive assistant to Ivan Grose, MP.

In 2001 Chris began working as an instructor with the 1913 Ontario Regiment Cadet Corps and was granted a Queen's Commission in 2002.

Chris was later awarded a Canadian Forces' Decoration for his service.

In 2005 Chris began working at the Ontario Ministry of Children, Community and Social Services as a case worker in the Ontario Disability Support Program office.

In 2007 Chris welcomed his first grandson Jakob, followed by Cole in 2011.

He also welcomed Neill’s wife Katie to the family in 2011.

As attendance will be limited, please see the link below to secure a time slot to visit.

A private service will take place.

Donations in memory of Chris benefitting the 1913 Ontario Regiment Cadet Corps, at the following link:  https://www.indiegogo.com/projects/christopher-brooks-memorial#/