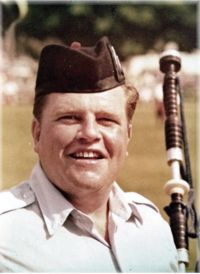 He began playing pipes when he was 12 under the tuition of his Uncle, Archie Finlayson.

John joined the 48th Highlanders of Canada where he played with both the Cadet program and eventually the big band.

He lead the band until 1995 before retiring as a Staff Sergeant with the Toronto Police Service Public Affairs Unit.

He also played with the Glenmore Pipe Band under the direction of Pipe Major Chris Anderson in the late 1970’s and early 1980’s, where both of his son’s were introduced to Pipe Bands.

He was a dedicated husband, father, teacher to many, including both of his son’s, adjudicator and professional piper with the Piper’s and Pipe Band Society of Ontario.

John passed away peacefully with family by his side on Thursday January 13th, 2022.

He is pre-deceased by the love of his life, Karen Arlene MacDonald (née Kerswill) who passed away on December 23rd, 2019, their baby son, Collin, parents, Charles and Flora, sister, Carolyn Lister and his grandson, Darrin.

He is survived by many friends and family in particular his son, Craig and his wife Heather, his son Ian and his wife Brenda and his daughter Kathy and her husband Shawn Gooch.

He is eternally grateful for the loving support, care and guidance he received from his daughter-in-law Heather and his daughter Kathy.

A celebration of John and Karen’s life will be held at a later date.