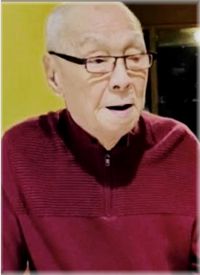 2 Timothy 4:7  I have fought the good fight, I have finished the race, I have kept the faith.

It is with profound sadness that the family of Lindbergh Yhap announce his passing.

Our Heavenly Father took Lindbergh into His loving arms to rest.

God was faithful to him as he was to God, answering his prayer - that he would transition to Eternal Life to be with God, to be free of his afflictions (dad’s choice of word) and to be in the comfort of his home, surrounded by his children and grandchildren.

If you asked a score of people who Lindbergh Winslow Yhap was, they’d all give you a different story. A loving husband. A selfless father. A doting grandfather. A caring brother-in-law. An avid swimmer.

A man who could mentally add hundreds of numbers while you tried to keep up with a calculator. A zealous reader. A workaholic. An accountant for a major company. An ostentatious showman of his physique. A hypochondriac. A man of routine.

Lindbergh was all of these things; but most importantly, he was a man of God.

Lindbergh was born on December 29th, 1927 in Christianburg, Guyana, to Arthur and Ursula Yhap, a prominent Chinese couple.

He was the beloved brother to his predeceased siblings: Eustace, Agatha, Doris, Leila, Harrington, Phyllis, and Rita.

He is survived by two sisters, Gwendoline and Jean. He was the loving uncle to many nephews and nieces.

Lindbergh is predeceased by his loving wife, Maureen, who passed away only four months ago. Lindbergh and Maureen were married for 58 years. Maureen and Lindbergh had a love like no other.

They cherished each other deeply and it was clear to everyone around them they were truly meant for each other.

Although Lindbergh’s passing was sudden, it is of no surprise that he was probably longing to be with his wife.  Proud father to Denise (deceased), Terry (Joan), Grace (Clive), David (Kimberly), Louise (Morton), Audrey (Paul), Peter and Paul. Lovingly known as Granpa to his grandchildren: Cindy, Michelle, Tyrel, Melissa, Roel, Jordan, Stephen, Joel, Samuel, Joianna, Morton, Matthew, Michael, Sarah and Kadin.

Lindbergh was an immensely intelligent man who prided himself in his years of service to the bauxite company, his ability to swim for long distances, his Chinese heritage, and the important role as a provider for his family. Through his years, Lindbergh held strong to his faith and his beliefs.

He was an active member of the Brethren Bible Chapel in Linden and then Forest Brook Community Church in Ajax. He attended church services every Sunday and continued to view the online services via Youtube.

He became close friends with Ian and Laurie, both of whom kept in contact with dad until his passing.

Lindbergh enjoyed swimming lengths of the pool at the Pickering Recreation Centre and then strolling through the Pickering Town Centre to purchase his snacks.

As a retiree in Canada, he played a pivotal role in ensuring the safety of his grandchildren, by walking them to and from school.

The family thanks God for the life of our dad; a life that we were and are privileged to be a part of; and for the legacy of faith and trust in God that he demonstrated to us.

We are filled with joy that it was our dad’s mandate and obedience to God to leave such a legacy.

Our dad’s passing has compelled us to ask some questions: What legacy are we leaving to our own chuldden? What will they remember about us? Will our faith be a support for them to want to experience Jesus for themselves? We ask God during this time that dad’s legacy of being known as a faithful follower will continue to live on in us.

The recent passing of his wife, Maureen, indelibly impacted Lindbergh’s life. His purpose as a companion was taken away from him. Yet, he tried to keep on going, picking up a new exercise routine of walking back and forth in the living room. He continued his daily regimen of watching CNN and T.V. shows: Jeopardy and Wheel of Fortune, as he relished in his favourite snacks.

We all felt dad was doing well and this was evidenced in the lovely celebration we had for him when he turned 94.

He asked us to sing the words “for he’s a jolly good fellow, no one can deny”, and then did his expected “Songs of Praises” asking God to bless his family.

Losing dad has created a void that will never be filled. He will always be in our minds, forever in our hearts - a legacy that will live on.

In his novel The Twelve, author Justin Cronin wrote, “As long as we remember a person, they’re not really gone. Their thoughts, their feelings, their memories, they become a part of us.”

Lindbergh’s family wishes to thank you from the bottom of their hearts for all your love, support, and acts of kindness at this difficult time.

It has been overwhelming and such a great source of comfort.

Please know that all your prayers, words, and actions are profoundly appreciated.

The family will receive guests at the McEachnie Funeral Home, Ajax Ontario, on Friday, January 21, 2022 from 12:00 p.m. to 1:00 p.m. with the funeral service to follow in the Chapel.  Burial to take place following the service. If you wish to attend please contact the funeral home for a visitation time slot.

Messages for the family may be share on their Guestbook .