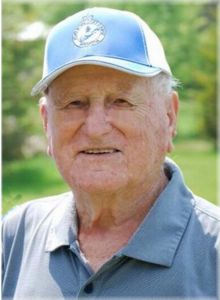 Predeceased by his beloved wife Audrey of 77 years.

Survived by his sister-in-law Judy Peleshok.

Harry will be fondly remembered by his large circle of dear friends, including friends from the Oshawa Golf Club and extended family.

Harry had accomplished so much in the century of living his life to the fullest. From working at the Tannery for .25 cents/hr, to joining the Air Force, becoming a firefighter, a home builder, a grocery store owner and a butcher.

Then he opened up his own dealership and became a successful car salesman.

While he was so busy with these careers, he held a beautiful marriage to his beloved Audrey for 77 years.

Harry was a role model and inspiration to all his grandchildren, Greg, Dayna (Tim), Sarah (Shawn) and Adam (Yolande). As well as his great-grandchildren Cassandra, Matthew and Blake.

Harry continued to be an active member at the Oshawa Golf Club since 1953 and enjoyed golf and playing cards with all his friends, until his passing.

Special thank you to all the health-care workers who provided exceptional care and comfort, especially Evelyn.

Online condolences can be made at mountlawn.ca .

In lieu of flowers, memorial donations may be made to the CHARITY of your choice.

Livestream of the Funeral Service https://foveo.stream/arbormemorial-mountlawn/harry-peleshok.