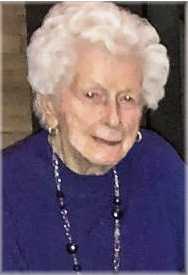 Age 97, of Whitby, Ontario passed away peacefully at Lakeridge Health Oshawa Hospital on Monday, April 18, 2022, after a brief illness just short of her 98th birthday.

Predeceased by her husband Donald Kirkby and son Keith.

Survived by her sister Marg.

Madeline Kirby was born in the farming community of embro, Ontario on April 30th 1924.

Madeline came from a large family with seven siblings.

Following High School, war had broke out which gave Madeleine the opportunity to work in support of the Army in Saskatoon Saskatchewan.

Followed by the war she worked at IBM in Toronto where she met Don who work in the family Hardware business in Islington Ontario.

They later got married and in 1954 Don and Madeline had their first son Keith followed by their second son Gordon in 1957.

They lived most of their married life in North Toronto where she looked after the homefront while Don commuted to Kirby Hardware in Islington to manage the business.

Many Summers were spent at the family Cottage on Lake Muskoka where Madeleine enjoyed summer activities such as shuffleboard and boating around the lake.

A lot of great memories were had for the family like waterskiing, fun activities and doing work projects around the cottage. Madeleine enjoyed traveling such as trips to Europe and cruises to the Caribbean and Hawaii.

Madeleine will be greatly missed by all her extended family and friends.

A Memorial Visitation and a Birthday Celebration Reception for Dorothy will be held Saturday, April 30, 2022 from 2:00 PM to 4:00 PM at the OSHAWA FUNERAL HOME , 847 King Street West.

In lieu of flowers, contributions in Dorothy's memory may be made to a CHARITY of your choice.

Fond memories and expressions of sympathy may be shared at  oshawafuneralservices.com for the Kirkby family.