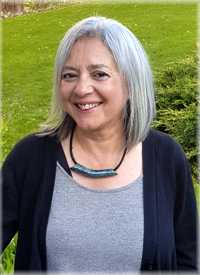 With heartfelt sorrow, the family of Marcey Collins announces her passing on April 24th at home, at 69 years young, to join her lifelong traveling companion on their next great adventure.

Though she fought a courageous battle with breast cancer, she certainly did not lose it, and lived right to the end on her own terms.

A brave warrior, she is predeceased by her loving husband and travel partner Dave, and leaves behind her most precious gifts, her daughters Sara (Andrew), Ryann, and Robin (Cory), son Jeremy, and grandchildren Britton (Nathaniel) and Zackary (Taylor), and Justin and Trever.

Loving niece of Alice (Frank), predeceased by her Portuguese aunts. Fondly remembered by her many cousins near and afar.

Adored Godmother to her “person” Margaret (Paul), and beloved by their children Cody and Dustin, and by her prima Nancy.

A special thank you to Marcey’s soul sister Judy (John). Always carried in the heart of her ladies from Hearth Place and Core, and from the CFA. Marcey will also be dearly missed by her many friends and the multitude whose lives she touched.

In her ever-changing world, she had the ability to adapt by reinventing herself. A respected innovator and entrepreneur, Marcey had a successful three-decades long career as a hairstylist before embarking upon careers as a life coach, and volunteer endeavours as a Community Food Advisor, among others.

Marcey’s passion for world travel was matched only by her creativity and her love of family, food, and music. She did so much living in her life. She was strong and resilient in times of adversity, squeezing as much lemonade as she could out of the lemons handed to her.

She was an inspirational soul, radiating joy and compassion, and was a light in the life of so many. We often hear stories of people like this, but rarely do we get the opportunity to encounter them, and our lives are so much richer for it.

Thank you to Marcey’s doctors and nurses throughout the years, and a special thank you to Dr. Forbes and Kerry, Dr. Sorensen, Dr. Irish, Dr. Burke, and Dr. Kassirer, without whom all of this would have sucked so much more. Thank you to Debbie and Steve at Armstrong Funeral Home for going above and beyond to fulfill Marcey’s wishes.

If desired, donations in Marcey’s honour can be made to Hearth Place Cancer Support Centre, or a charity close to your heart.

A celebration of Marcey’s life will be held at a later date.

Though she will be dearly missed here, we know that she is making her way back home to Portugal, to the ocean and the sun that are so deep in her soul; to the place where her heart belongs.

Online condolences may be made at  armstrongfh.ca  .