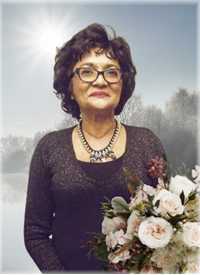 Bibi Zalina Ally of Toronto Canada who went to be with the Lord on May 2nd, 2022 was born in Georgetown Guyana on December 15, 1949, to both her late father Harun “Haroon” Ally and mother Kademan “Hilda” Ally.

And not forgetting her adorable and cherished dog, Lucy.

Bibi Zalina, also known to some as "Betty Boop", enjoyed life to the fullest and cherished every moment that God granted her.

Whether in the banking or service industry she was a hard worker who was passionate about what she did.

Her trust in Jesus has promoted her from this world to glory with her heavenly father.

Her presence and her loving kindness will forever be cherished by both her family and friends.

Aside from the children she doted on, Gwen is survived by her sister Hazel and predeceased by her beloved husband James and brothers Barry, David and Clive.

John 11: 25   Jesus said to her, “I am the resurrection and the life.
The one who believes in me will live, even though they die;".