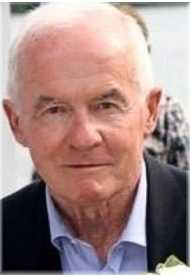 Born in East York in 1936. Predeceased by his parents Lillian and Ted Arbour, his brother Neil and sisters Theresa, Marie and Irene.

Many hours spent enjoying the cottage life on Whitestone Lake and then Harp Lake with family and friends. Many hours spent on the golf course with the highlight being a Hole in One at the age of 77. Enjoyed curling at various clubs over the years and enjoyed travelling the world with Irene, the love of his life.

After graduation, he continued playing the game he loved. Highlights were playing for St. Brigid’s and capturing a Senior THL title in 1957. Later enjoyed playing for the first old timers league in Toronto.

Continued to enjoy the game with the Hydro Happy Gang and the Out to Lunch Bunch until he hung up the blades at the age of 70.

A kind and thoughtful man admired by so many and inspired the generations following him.

Funeral services to be held at St. Johns the Evangelist Parish at 903 Giffard St in Whitby on Saturday July 9 at 10:30 AM.

In lieu of flowers, the family would appreciate donations to Parkinson Canada https://www.parkinson.ca/