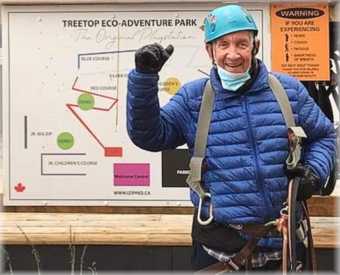 After an extremely brave battle, he passed peacefully, at home surrounded by love.

Dave was a patriarch to many, a beloved husband and father, respected father-in-law, adored grandfather, uncle, brother, and friend.

He is survived by his children Tracey (Ross), Drew, and his grandchildren Jake, (Heather), Adam and (Alyssa) and his nieces Karen, Christine, Lisa and nephew Scott.

He is predeceased by his loving wife Betty Anne (Graham), his brother Alan (Carol Lee) and Craig.

Born on October 10, 1939, in Toronto. Dave grew up in the Greenwood and Queen area and St. Stephen’s United church is where he met the love of his life Elizabeth (Betty Anne) Graham.

They married in 1961 and loved each other unconditionally. Dave and Betty Anne went on to have two children.

Throughout his life, Dave's primary focus was first and foremost on family. As much as Dave loved his role as husband and father, it was his role as Grampy that he treasured the most.

His grandson's became the center of his world and they will be his legacy.

Dave was always a kind, quiet and thoughtful man and in later years became a bit of a risk-taker, getting his motorcycle license at 76.

Dave was also lucky enough to have friends he called family; Gord, Sam and Debi. He had respect for all human beings no matter their background, origin, gender, or age.

He treated others the way he wanted to be treated.

Dave’s family and friends will always be inspired by his courage, unwavering love of family, his sweetness and profound loyalty. He will be remembered for his kindness, selflessness, and all around adorableness.