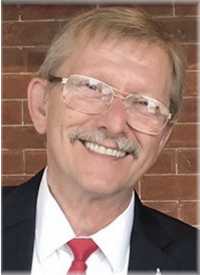 Glenn will also be missed by nieces and nephews Kristen, Chris, Ella, Rowen, Maegan, David, Steven, Ryan, Tyler and Arron, as well as by in laws Bob, Bill, Fred, Jim, Peter, Rose and their families and many friends and acquaintances.

Glenn and Liz loved having the grandchildren for summers and March Breaks. It kept them feeling young. Paige was a wonderful addition and brought back the joy of childhood.

Liz writes on how they met -“Glenn was a Bass player and loved being part of our “musician family” of which there are many. His original band as a teenager was his starting point with an electric bass.

His drummer, as it turned out, was a good friend of mine from public school and he brought Glenn with him to visit me in 1966 and the rest is history. His new band Mr. “E” Train (named for the key) where he eventually began playing the stand up bass as his preferred instrument with Bill Miskelly, Stuart Blower and Mike Ball, providing us with many years of fun.

Then Amanda & Steven added him to their duo on many occasions for years.

Glenn played his last gig, with Amanda and Steven, the night before he passed. We and our girls loved to visit Pointe au Baril on the water at the “Summer Place” with his Dad, Step-Mom Pauline, Carol and Kenny in the summers. Then we got to spend time on the lake with Mandie and Nick these past few years and enjoyed our time with them.

Glenn and Paige had the best laughs on the boat. Glenn and I were pioneers in the business of Fire Safety, starting A.G.E. GROUP Inc. in 1984 and A.G.E. GROUP Fire Safety, 2010. Glenn’s mom, June “Buddy” suggested the anagram: Amanda, Glenn/Gillian, Elizabeth for A.G.E., making it a family affair, so our girls grew up in the business and Gillian's children even helped us monitor fire drills!

We have many people to thank for continuing to support our business and a lot have become long time clients/friends we looked forward to seeing. Glenn loved standing in front of as many people as could fit in a room and teach them fire safety or play music for them.”

A Celebration of Glenn’s Life will be held on Saturday, August 6, 2022 at West Shore Community Centre (1015 Bayly Street, Pickering) from 2-4 pm.

Donations will be gratefully accepted for the Heart and Stroke Foundation or for the  CHARITY of your choice.

Expressions of condolence may be left at etouch.ca .

Rest In Peace, my love, and soar with the eagles you loved so much 💕