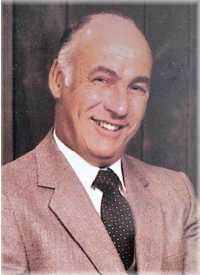 He joined the Merchant Navy as the ship's Cook!

He married Betty Brooks in 1952 and they had three children, Tony, Michael (predeceased) and Carol Ann (predeceased).

In 1965, Ray decided that he wanted a better life for his family, so he applied for immigration to Canada and, in the same year, moved his family to Canada.

Ray took the first job he could find which was at Lasco Steel, in Whitby, where he stayed until retirement. He went on to become the president of the local Steelworkers Union for 7 years.

Over the same years, he became a Mason and Shriner, and found comfort and a second home with the Salvation Army, where he helped wherever he could, like working on the Bubble at Christmas.

He also continued to educate himself and became a Certified Welder and took other courses to gain skills in carpentry, small engines, woodworking, and so much more.

A devoted dog lover, he raised and trained dogs most of his life, and as a devoted husband, he worked hard along with Betty to build financial stability for the whole Family.

Once retired, he never stopped working maintaining his property and supporting his son Tony, and grandkids Jon and Nicole!

In his mid 80's, much to the surprise of all his doctors, he survived Leukemia and spent several years enjoying a good quality of life gardening and looking after Betty, who is 4 years older than him.

He lived a long and good life and was helped and supported by long-time friends Burt Noble and Ian Turner.

The last few years of his life he fought a hard battle with various illnesses but was determined to keep on going, and that he did.

In accordance with Ray’s wishes donations can be made to Canadian Cancer Society or The Salvation Army.