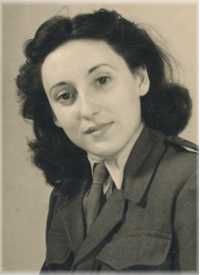 Diane is now reunited with her loving husband of 57 years, Peter Savage.

Born in Belgium, Diane was evacuated to England at the age of 8 and raised by relatives until her family could join her.

She proudly served in the British Armed Forces as a Lieutenant with ENSA (Entertainments National Service Association) entertaining the Allies of WWII in Germany in 1945.

ome Royal Navy Seafire pilot wailing on a tenor sax at a jam session. He and another sailor offered to walk her home. They both asked her out but she said she could only pick one. She and dad were inseparable for 60 years.

They married in the Bath Abbey.

Opportunity awaited a few years later in Etobicoke, Ontario, Canada, where they put down roots.

While her family was the light of her life, Diane found her other calling by volunteering with the Queensway General Hospital for over 30 years.

A natural storyteller her whole life, she continued to entertain her many friends and family here and overseas. Her vivacious personality and smile warmed the hearts of those who knew her and strangers alike.

She lived her life with joy, every single day.

In lieu of flowers, donations to SickKids Foundation would be appreciated and condolences may be expressed online at: wctownfuneralchapel.com .