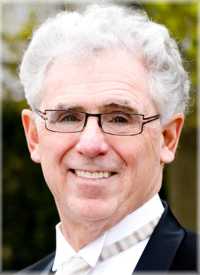 At the age of 80 with his loving family by his side, Bob passed peacefully at Lakeridge Health Oshawa after a brief battle with Leukemia.

He loved and was so proud of his seven grandchildren Jamie, Dahlia, William, Gavin, Eleanor, Celeste and Matthew.  He will be greatly missed by his sister Joanne, many nieces and nephews, extended family and friends.

Bob was born in Oshawa where he attended O’Neill Collegiate and was an active member of the football team.

He was an avid curler and spent his weekends skiing at Kirby Ski Club.

While at U of T Bob was a member of Phi Kappa Sigma Fraternity where he made many lifelong friends.

It is while studying to become a dentist that Bob met the love of his life, Sheila, and they married.

Following graduation Sheila and Bob returned to Oshawa where he enjoyed a successful dental career for over 45 years.  His staff and patients remained loyal to Dr. Bob; many of his team were with him for the majority of his career and when he retired he was proud to say that he had been the dentist to many families for generations.

One of Bob’s favourite pastimes in life was skiing.

Most winters involved a ski holiday somewhere in North America with his ‘skiing buddies’, the memories of which he cherished long after he hung up his skis.

Summers were spent at the family cottage where Bob loved pulling the kids on water-skis behind the boat or watching the sun set over the lake from the deck.

The only thing that kept Bob away from the cottage in the summer was the annual fishing trips he took with his group of amazing fishing friends.

Thoughts of sipping scotch by night and catching fish by day were some of Bob’s most treasured memories.  For several years he was involved with the Oshawa Hawkeyes Football Club.

He was proud to claim a pilot’s license as one of his great achievements.  He also enjoyed scuba diving when the chance arose while on vacations in warm climates.

Lately, sitting on his deck watching his grandchildren playing in the pool, was Bob’s happiest pastime.  He was a doting grandfather, a loving husband and proud father.

He will be greatly missed by all.

Donations made to Lakeridge Health Oshawa are welcome in lieu of flowers.

We would also like to encourage Bob’s family and friends to please consider becoming regular blood donors.  www.blood.ca

Online condolences can be left with either makfuneralhome.com or mountlawn.ca .