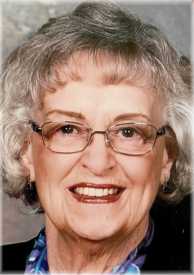 On Tuesday October 18th at the age of 83 June Millicent Wildman peacefully passed away surrounded by her loving family.

She was the daughter of the late Leslie and Elsie Martin.

After a divorce, June met the love of her life, Murray Wildman, in 1989 and they were married in June of 1991, where they instantly became a family of 10.

Their marriage lasted until 2019, when Murray passed.  Before she met Murray, June was clerical worker for the Sears store in Oshawa.

She worked there for about 20 years, when the office was closed.

She held a few other clerical jobs before meeting Murray, then once married to Murray, she did not have to work any more. So, she kept herself busy with the many hobbies she enjoyed. Among her many talents were sewing, knitting, and needle point. She was also an active member of St. George's church where Murray was an organist.

Some of her other activities included line dancing, tennis, and she loved watching hockey, baseball, and tennis, especially if they were Toronto or Canadian teams.

She is also survived by her brother David and his wife Jane, and their children Barbara and Christopher.  We will miss June's sense of humour and are grateful for everything she was to her family and friends.

The visitation will be held at St. George's Anglican Church, 51 Centre St. S., Oshawa, on Saturday, October 29th at 10am, followed by the funeral service at 11am.

In lieu of flowers, June as asked that you make a donation in her name to either the Durham Humane Society, SickKids Hospital, Alzheimer’s Society, or St. George's Church.