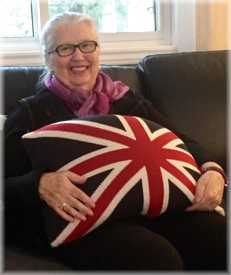 It is with great sadness we announce the passing of Janet O’Neill at age 84.

Janet was born & grew up in Bristol, England.

At age 29, she along with her husband & two daughters, emigrated to Canada. She had many different careers during her working years.

Testing chemicals, secretarial & administrative positions and to finally be the office manager of 90 people in the procurement depart at an engineering firm.

Her most happiest times however, we’re spent looking after her grandchildren.

Whether it was sleepovers or “ventures with Backy”, holiday celebrations on Laurier Crescent, trips to Florida, Hilton Head, or California or just taking them to an activity.

Nanny was always there for her grandchildren.

Sadly dementia took her away from us but her memory lives on for all of us who called her “Nanny”.

In lieu of flowers, donations can be made the the Alzheimer’s Society, to help find a cure for this cruel disease.