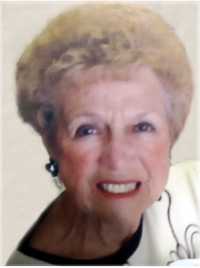 The Sharrard family welcomes prayers, love and support as we mourn the loss and celebrate the life of our beautiful Anna-Jane Sharrard (nee Wirsching).

Anna-Jane, daughter of Vera and Norman Wirsching, was predeceased by her husband Bruce and her brother Bill (Barbara-predeceased).

Born in Lakeland Florida in 1927, the family moved back to Canada shortly thereafter, settling in Oshawa.

Anna Jane was a member of the King Street United Church and sang in their choir where her lifelong affection with singing began. She worked at GM in Oshawa for a short time before settling in with Smith Transport for 15 years.

After he returned from his tour overseas during the second world war, she married Bruce Roy Sharrard in 1947.

The young couple moved to Windsor for two years as Bruce pursued a business venture, after which they returned to Oshawa and started a family. Along came Karen, Marty, Shelley, Julie and then, after requesting a set of dishes, instead came John. Later, in 1957, Anna Jane really embraced her love of singing and entertaining and joined the Oshawa Chapter of Sweet Adelines.

Sixty (60) years later she retired, after winning 3 International Championship Gold Medals with the North Metro Chorus. During this vast career, she made many life-long friends, creating special memories with other Sweet Adelines from all over the world.

Anna-Jane discovered her beautiful artistic talent for oil painting in her 60’s, sharing her creations with family and special friends. Other hobbies and interests included golf, downhill skiing, curling, bowling and more, as well as being famous for her homemade cookies.

Another love was playing Euchre and Cribbage in the evenings at the Whitby Seniors Centre, the Oshawa Airport 420 Wing and with her friends, neighbours and especially family.

Much of this fun happened at family cottages throughout her lifetime, beginning with her childhood cottage on Stoney Lake.

This tradition maintained for years at Anna-Jane and Bruce’s self-built cottage on Moira Lake and continued at both Marty and Karen’s cottages as well.  We were so fortunate that Anna-Jane was full of energy, being healthy and active right into her 95th year.

An active member of Westminster United Church, she lived at and maintained her own home right till the end, where she received constant and loving support from her wonderful neighbours.

Anna-Jane was truly a bright light who inspired love, laughter, kindness and generosity. We will always feel blessed to have had her as our Mom, mentor and best friend, cherishing her contagious sense of humour and love for life.

In lieu of flowers, Memorial Donations to the Children's Wish Foundation or the Humane Society of Durham Region would be appreciated.