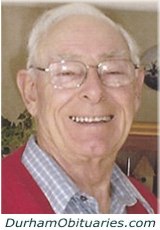 On Thursday October 19, 2017, Frank passed away peacefully at Lakeridge Health in Oshawa in his 92nd year with his beloved wife, Willy Veronica (van Berkum) by his side.

He served in the British Army as a paratrooper with the Royal Warwickshire Regiment at age 16 in 1942.

He was in the Parachute Regiment 6th Airborne division.

He served in Europe until the end of the war. After the war, he served in Palestine from 1945 to 1948 with the 3rd Para Brigade H.Q.

Frank came to Canada on March 30 1957 from Birmingham, England. He enjoyed golf and was proud to have had 4 holes in one. Other hobbies included fishing, water colour painting, gardening and bird watching. Frank is survived by his beloved wife Willy Veronica (van Berkum).

Also missed by extended family in England and Holland.

In lieu of flowers memorial donations to the Canadian Pulmonary Fibrosis Foundation and the Humane Society would be appreciate.