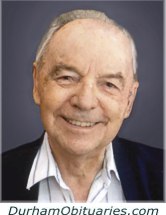 He will be greatly missed by his children Jim (Linda), Ron (Lori), Donna (Jim) and Gary (Irena), his grandchildren Trellawny (Julien), Lisa (Luke), Nick, Jenna (Derek) and David, his great grandchildren Iver and Ayla and his sister Audrey (Bruce) and nieces and nephews. Special thanks to Nelia.

A long time ACTRA member, Kenny began his on-air radio career in 1939 at the age of 16.

In his 20's, he co-starred in the long running CBC radio series Cuckoo Clock House.

He also spent several years in advertising sales for Bell Telephone Company and Thomson Newspapers. Upon his retirement, he appeared in several movies and TV series.

He was well known for his sense of humour and kindness and well liked by those who knew him.

Thanks for the memories.