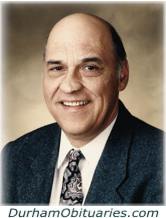 Passed away peacefully at Brucelea Haven, Walkerton on Tuesday November 7, 2017.

Beloved husband of the late Donna.

Loving father of Tammy and her husband Bob Dejager and Paul Hawrychuk and his wife Darlene.

Predeceased by parents, Michael & Anne Hawrychuk and brothers Matt & Russell. He will be lovingly remembered by his nieces, nephews and many friends.

Sam was born on the family farm outside Roblin MB. He came to Toronto with a few of his cousins in his early 20’s and eventually joined the Toronto Police Force. He was always a country boy at heart which led him and his family out to Dryden, where he joined the Dryden Police Force and to be close to the Family farm.

He could always be counted on to help with putting in and taking out the crops each year, no matter where he lived at the time.

In 1972, the family moved to Bowmanville and he joined the Pickering Police Department which amalgamated and became what is now known as the Durham Regional Police Service. Sam worked his way up the ranks and retired in 1994 to enjoy his real passion, “the outdoors”. He was an avid fisherman and hunter and was most happy whether casting a reel or tracking a moose.

He felt most comfortable in old jeans, boots and a cap on his head. In his early 70’s Sam was diagnosed with the onset of Alzheimer’s. Though it may have been devastating to most people, he made the most of it. He still enjoyed his yearly fishing trips with his buddies, his visits with family and friends and his frequent trips to the Casino with his wife.

He was at home being cared for by his dedicated, loving wife until she passed in 2014. He then spent the last few years at Brucelea Haven in Walkerton, which was a smaller community, where his family could take him for walks, in more of a country setting.

At Sam’s request, a Private Celebration of Life will be held at NORTHCUTT ELLIOTT FUNERAL HOME, 53 Division Street, Bowmanville.

Memorial Donations may be made to The Alzheimer Society.