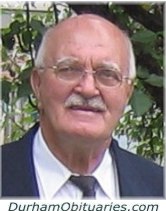 It is with great sadness that we write of the passing of Clifford Hayes at age 88 on Friday December 8, 2017, at Lakeridge Health Oshawa.

Cliff died peacefully with family at his side.

Clifford was the beloved husband of Lorna Hayes (nee Miller) for 63 years, and father to Blaine, Philip and wife Cindy, Janet, and Carol and husband Chris.

One of Clifford’s joys was being grandfather to his seven grandchildren: Jesslyn and Kevan (Liz); Alan, Jolene, Lynn and Elizabeth; and Madeleine.

He was great-grandfather to ten: Anastasia, Emily, Ajay and Chevy; Gordon, Angela and Shelby; Hannah and Lily; and Orias. Son of the late Percival and Mary Hayes, Clifford is lovingly remembered by brother Brian and wife Barb, brother-in-law Bud (Marion) and predeceased by siblings Marion, Margaret, and Audrey. He will be missed by his many nieces and nephews, extended families, and friends.

Family was important to Cliff and getting together at Hayes reunions was always something he looked forward to, as were visits with the Millers. He had many life-long friends, and time spent travelling, hunting or on “the farm” provided cherished memories.

During his sales career, he served as president of the Associated Canadian Travelers. After retiring, Cliff and Lorna travelled the breadth of Canada, as well as the United States, England, Scotland, and Tanzania. An avid bird-carver, Cliff enjoyed the time spent with friends at the

Northview Bird Carvers. With others, he ensured that the legacy of the one-room schoolhouse he attended at Taunton and Harmony continued in the naming of Maxwell Heights Secondary School, and he established its Founders Award.

Memorial plans will occur at a future date.

Memories and condolences can be expressed online at mountlawn.ca.