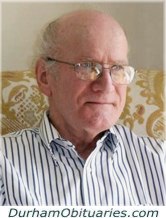 Don McQuay passed away peacefully at Fairview Lodge, Whitby on Saturday, December 9th, 2017 with his family by his side.

Don was the proud and beloved father of daughter Robin (Patrick) and son Kim (Muna) and dearest “Poppa” of granddaughter Lauren (Ben) and grandsons Evan, Liam, and Praccho.

Don was born in Toronto and moved to Whitby at the age of two, where he joined his siblings in a remarkable shared experience of farm life that forged strong family bonds, inspired remarkable stories, and had an enduring effect on all.

After graduating from Whitby High School, Don attended the University of Guelph (then Ontario Agricultural College). His Class of ’49 formed lifelong friendships that they celebrated for decades in lively reunion gatherings at five-year intervals. Don and Lois were married on August 14, 1952.

They settled in Whitby where, after a brief period of farming, Don embarked on the five-decade real estate career that he practiced with distinction and professional integrity until his retirement in 2007.

Don served terms as President of the Oshawa and District Real Estate Board and Town of Whitby Councillor, and for many years served on Whitby’s Committee of Adjustment and as a Trustee and Property Manager of Trafalgar Castle School.

The family wishes to thank the staff of Fairview Lodge and Thornton View for their extraordinary care and affection for Don.

A memorial service will follow at the funeral home on Saturday, January 20th at 11:00 am.

In lieu of flowers, donations in Don’s name to the Alzheimer Society (www.alzheimer.ca) or the Canadian Cancer Society (www.cancer.ca) would be greatly appreciated.