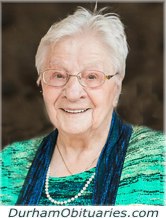 Born in the village of Boerdonk in Noord Brabant, The Netherlands, Nettie was the fifth child of ten and the youngest daughter.

Survived by her youngest brother, Johann. She met Wilhelmus (Bill) from the neighboring village of Mariahout and they were married in January 1953.

They celebrated their 60th anniversary in 2013, the year of his death.

Their honeymoon was immigrating to Canada to build a new life, the only two from either family to do so. Devoted mom to Rita, Ben (Colleen) and Wilma. Loving Oma (and famous pannenkoek-maker) to Rebecca, Jeremy, Sarah and Julie and great grandchildren Ella and Adrian.

She was delighted to be able to attend the wedding of Sarah and Steve this past August.Nettie was a dedicated and hardworking member of the CLW for five decades and the Church Choir for more than four. She was a keen gardener (Communities in Bloom winner 2006), knitter, card player and volunteered for groups like Meals on Wheels and the Canadian Cancer Society.

Nettie cultivated and valued a number of close friendships with women from the church, the Dutch community and neighborhood. These friendships, her family and most importantly, her faith, meant everything to her to the end. The entire family would like to thank friends, the staff of Colonial Retirement Home and Lakeridge Health Whitby who provided laughter, comfort and care in her final years and days.

In lieu of flowers, donations to the Canadian Diabetes Association or Parkinson Canada would be appreciated.

Online condolences can be made at  oshawafuneralhome.com.