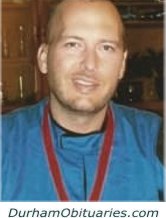 After living with brain tumours for the past 10 years, Andrew Scot MacKenzie died on Sunday, December 10th, 2017 at the age of 41.

He leaves behind his mother Eileen, father Doug, and his sister Adele.

Scot was born on November 8th, 1976 in Wawa, Ontario. He lived there a short time, as well as in Mackenzie, B.C. in his early years, and in Bowmanville for the past 35 years.

He excelled in driving go-carts and in Formula 2000 cars and performing as a professional driving instructor.

Although diagnosed with a brain tumour in 2008, Scot remained dedicated to completing his Honors Bachelors of Commerce degree, and did so in 2010. Scot was a driven professional and remained a strong iron willed man even throughout his final months.

Scot was part of a loving extended family of several aunts, uncles, and cousins and was predeceased by his grandparents and an aunt.

In lieu of flowers please donate to the Sunnybrook Brain Cancer Research Department.

Online tributes may be placed at courticefuneralchapel.com.