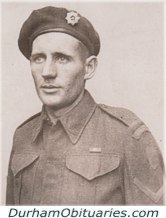 Passed peacefully on Tuesday, December 12th, 2017 in his 96th year with family at his side.

Lawrence was born on January 27, 1922 in Horning’s Mills and moved to Oshawa when he was 4.

He is survived by his loving wife of 73 years Jenny (Jane Petrie) and children Dave (Sandi), Joyce (Chris Daffern) and Jean (Howard Berg).

He is also survived by his sister Rose, sister-in-law Betty Ross, and several nieces and nephews.

Lawrence was a veteran of World War II, having voluntarily enlisted and served in England and Europe with the D platoon of the 86th Bridge Company, Royal Canadian Army Service Corp. He was a railroader with the Oshawa Railway and later the Canadian National Railway for over 43 years, working alongside his good friends Peter Sobil and Gus Plancke.

Lawrence was at his happiest at his cottage on Redstone Lake, Haliburton, fishing, building anything with a hammer and saw, rearranging boulders into stairways, and “telling lies” with his dear cottage friends in the evenings.

He was an honest, quiet man, a lover of opera, classical music and bad jokes, amazing at crosswords and cribbage, and set an example for many.

In lieu of flowers, donations to Prostate Cancer Canada or Heart & Stroke Foundation of Canada, would be appreciated by the family.