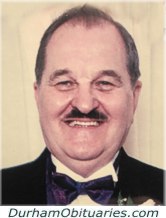 Peacefully with family by his side on December 15th, 2017, at Lakeridge Health Oshawa at the age of 88.

Mass of Christian burial will be held on Wednesday December 20th at 11a.m. at ST. MARY’S OF THE PEOPLE CHURCH, 570 Marion Avenue, Oshawa.