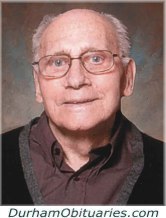 With deep sadness we announce the passing of our father, grandfather and great-grandfather at the age of 92.

Pre-deceased by his beloved wife Tietje in 2010 he leaves his loving family, daughters Margaret (Russell Erman) of Oshawa, Elizabeth (David Dekker) of Kitchener and Louise (Stephen Peterzon) of London.

Born in Wierum, Friesland, The Netherlands to Kornelis and Grietje (van der Zee) de Vries, "Louie" was the youngest of three children, after sister Engeltje (1918-2013) and brother Tjeerd (1921-2014).

Lieuwe attended school and helped support the family by working at nearby farms or fishing alongside his father aboard their North Sea trawler the WL15.

Lieuwe spent three years starting in 1946 in Indonesia serving with the Royal Dutch Army. After returning home, Lieuwe didn't see a future for himself there, so in 1951 emigrated to Canada.

He worked many jobs and made his way from Truro, Nova Scotia to Oshawa, Ontario.

He found steady work with General Motors in the paint department. He sent for the love of his life Tietje and were married on April 25, 1953. Together they settled in Whitby and raised their three daughters.

Although he had strong ties to the country of his birth, he was proud to become a Canadian and always said so.

Lieuwe had great respect for the land and a strong passion for growing things. His vegetable garden was second to none.

He was into reduce-reuse-recycle long before it was fashionable.

He retired from GM in 1980. Over the next 22 years they moved between the country and the city, living in Fergus, Oshawa, Little Britain, and Lindsay. In 2002 they made their way to a seniors residence in London.

Donations can be made to your choice of CHARITY or local food bank.

Grateful thanks to everyone at Dearness Home for their caring and support.

Lieuwe was laid to rest beside his loving wife of 57 years at Mount Lawn Memorial Gardens in Whitby.