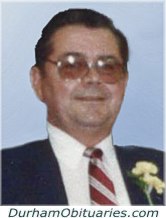 Passed away at Lakeridge Hospital in Ajax on Tuesday Dec 19 2017 with his family at his side.

He was loved dearly by all who knew him.

He joined the British Navy at 15 years old and became a Police officer in England at 23.

John and his wife Barb Immigrated to Canada in 1967 when John was 30 years old and promptly joined Toronto Metropolitan Police where he retired as a Sargent at 42 Division after 27 years of service.

He was well known for his big heart and sense of humor.

He spent many years managing and fundraising for local minor hockey.

He was also a long time member of the Ajax Legion.

He is survived by his wife Barbara of 57 years and 3 grown children and 6 grandchildren.

We will all miss him every day until we join him in the afterlife.

On-line condolences may be placed at  mceachniefuneral.ca.