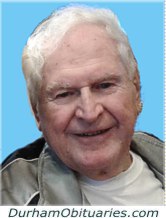 Beloved husband of Vivian (Snider), his wife of 62 years, of Mitchell’s Corners.

He leaves his children Gayle (Todd Krowchuk) of Oshawa, Suzanne (Brian Atkinson) of Warkworth, Bob (Brenda Parry) of Courtice and Brent of Courtice; his 11 grandchildren James (Tanya) of Brooklin and Holly Ambrose; Nicholas and Mark Ambrose of Whitby; Zack Krowchuk of Deep River and Kristin and Kaitlyn Krowchuk of Oshawa; Mason, Garett (Amber), Carrie and Tyler Atkinson, all of Warkworth, and one great-grandchild, Logan Ambrose.

He is deeply missed by his brother Skip (Cheryl) Ambrose of Bobcaygeon and sister Margaret (Les) Fickling of Bridgenorth.  Brother-in-law of Don Snider (Edna) of Belleville.

He was predeceased by his dear brother Harry of Oshawa and his parents, Robert and Viola (Cooper) Ambrose of Oshawa.

Jim was a proud 30 year employee of General Motors in the Oshawa truck plant’s industrial engineering department. He was a past vice president of 420 Wing RCAFA Oshawa, a longtime volunteer with Community Care and served on the board of stewards of Zion United Church at Mitchell’s Corners.

Interment at Ebenezer Cemetery at a later date.

On-line condolences can be placed at courticefuneralchapel.com.