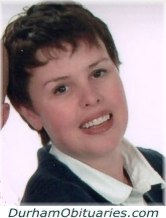 McPHEE, Corinna  - It is with heavy hearts that we announce the passing of Corinna Louise McPhee on December 28, 2017.

Born in Sydney, Nova Scotia on 7 January 1965, Corinna enjoyed her younger years loving life in New Waterford before to moving to Scarborough and settling in Whitby, Ontario.

Prior to taking ill, Corinna enjoyed her work in the Insurance field.

She enjoyed spending time with her family, especially her treasured dog Harley and husband Dino. Corinna enjoyed sitting on her step to have a chat with the neighbours and could always be found interacting with the community.

She is survived by her nieces Taylor and Rylee MacDonald and nephews Ethan, Eric and Thomas Wilson.

As per her wishes, Corinna has been cremated and her family will notify the community as to a celebration of life in the future to be held in Nova Scotia.

Donation in Corinna’s honor may be made to the Canadian Cancer Society, Crohns and Colitis Foundation or a CHARITY of ones choosing.

“Death is not extinguishing the light, it is only putting out the lamp because the dawn has come”.