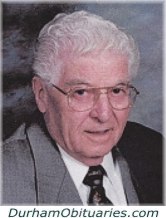 Peacefully at Lakeridge Health Ajax Pickering on Sunday December 31, 2017, at the age of 92.

Beloved husband of Peggy Cobb and the late Annabelle Cobb.

Donations in memory of Ken to the Canadian Cancer Society or to “Durham Children’s Aid Foundation” for Sharon’s Kids would be appreciated by the family.