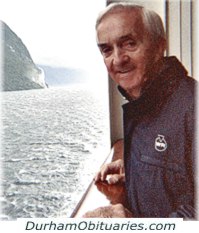 Walter Libby died January 3, 2018 at the age of 90 following a great life well-lived.

Walter was also blessed with three great grandchildren, Isabella and Sebastian Buitrago and Oliver Meier.Born in Oshawa on October 12, 1927 to Vera (Zealand) and Martin Libby, Walter was predeceased by his sisters, Ruth Roberts and Doreen Skitch.

Because of his hard work and dedication, the company continues 60+ years later.

He enjoyed and valued his relationships with employees, customers, suppliers and industry peers.

Walter was a long-time member of The Oshawa Golf Club as well as The Meadows Country Club in Sarasota.

He was also a board member for the Oshawa General Hospital for many years and was a life member of the Oshawa Masonic Temple and HRAI Canada.

He was a great believer in good diet and exercise and was a devout Christian.

In lieu of flowers, donations to Lakeridge Health, Voice or the Heart and Stroke Foundation would be appreciated.