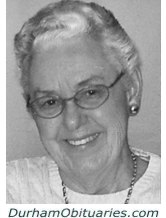 It is with great sadness that Betty’s family announces her peaceful passing on January 2, 2018 after a long battle with lung cancer.

She is survived by Ken, her beloved husband of 68 years, and by herloving sons Brian (Cynthia), George (Dawn) and Jamie (June).

Betty was born to wonderful parents, Dr. and Mrs. William and Mary Arnold, in Baldur, Manitoba, where she lived for seventeen years and with which she kept a strong connection her entire life. In 1943 the Arnolds moved to Winnipeg, where Betty attended United College and later pursued a career as a dental assistant. After their marriage in 1949, Betty and Ken settled in eastern Canada. They spent many happy years raising their family in Montreal, Halifax and Connecticut. They then moved to North York and later to Guelph, where they perfected their roles as model grandparents.

After their sons were grown, Betty had the opportunity to travel extensively with Ken in North America and Europe. She often said, “When I was a young girl in Manitoba,I never imagined that I would see so many wonderful things and have such a full life.”That being said, by far the most important thing to Betty was her family. She was extremely proud of her husband and sons, always selflessly putting them ahead of herself. Shelovingly welcomed each of her daughters-in-law, grandchildren and great grandchildren into the Aitken family, and her love and support for all family members was unending. She was a firm believer in the golden rule, and was exceptionally kind and considerate to everyone she met.

At Betty’s request, cremation has taken place and a private family service will be held at GROVESIDE CEMETERY in Brooklin, Ontario. The family wishes to express its heartfelt thanks to the staffs of Amica in Whitby and the Supportive Care Unit at Lakeridge Healthin Oshawa for the gentle and kind attention that made Betty’s last months comfortable.

Online messages of condolence may be left for the family at Barnes Memorial Funeral Home.

Friends who so desire may make donations in Betty's memory to either the Baldur & Area Endowment Fund (make cheques payable to the R.M. of Argyle, Box 40, Baldur, MB R0K 0B0), the Lakeridge Health Foundation or Canadian Cancer Society.